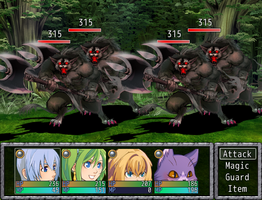 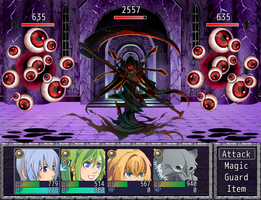 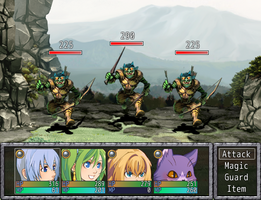 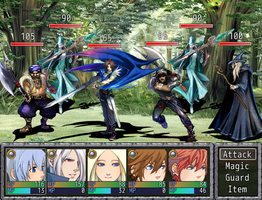 A brief update is long overdue.  The game is finished.  My Kickstarter backers are finishing up playtesting the game and all of their backer additions have been added and tested.  The game is in its near final form.  Since my first two-ish releases of the demo, I've made tons and tons of changes (most minor, but all to help the flow and realism of the game) and have updated the demo another few times since.

The demo released on 07/05/17 should be the last upload of a demo.  So if you grab this one, this is literally the exact game as the final product that will be sold on here, Steam, and other outlets, except it will cut off after you get about 1/5th or 1/6th thru.   Below will be a changelog of what has been added/subtracted, just in case some of you out there were curious:

- King Vasilis is now dead. Queen Delilah has replaced him.

- Most monsters have been slightly rebalanced (made easier).

- Calista is met both on the street or in her house. Her letter to Bruno has been removed (superfluous quest).

- The Caravan is now visible on the road.

- The bar owner in the Copper Fox now gives a better description of where the bandit camp is. The map around the forest has been redesigned to make it easier to locate as well.

- A unique Bestiary/Monster Book has been added!

- Early game enemy RES has been decreased to give magic a bit more "oomph."

- Better storyline development regarding why Nolan is quiet on his status as Prince/mysterious nature.

- The "Bub" sidequest has been added.

- Gideon was made even stronger so that it is much more clear that you cannot defeat him during the duel.

- There was a guard that states "You may proceed" but would still automatically tell you to "halt" prior to re-entering Castle Silverdale.  Fixed.

- The Underground Passage was made really windy so if you approach the boulder with the explosive, your "flint" will not light (this is if you don't have Cat in the party).  New dialogue was added with Calista, who suggests trying to find a Fire or Lightning spell in Cruxis.  If you head to the Magic Shop in Cruxis, the wizard will explain that he sells neither of those spells, but adds that you should "look around town."  This should clarify that you're still in the right spot.

Get Astoria: The Holders of Power Saga

Astoria: The Holders of Power Saga